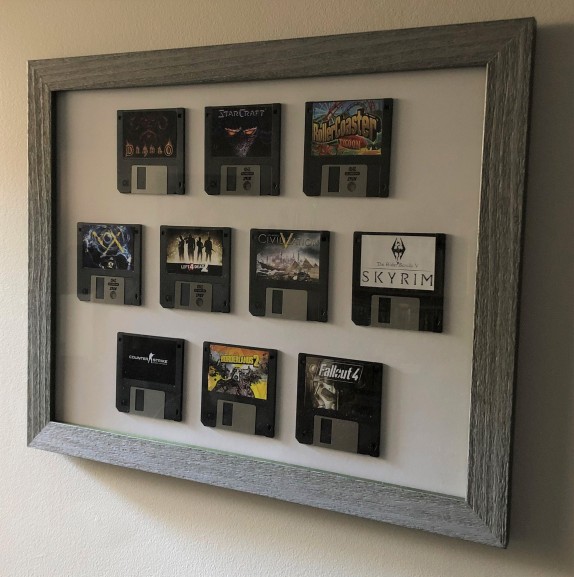 One of my very best friends, Radutron as he goes by, e-mailed me around Christmas asking me to list my favourite video games growing up and to write a short blurb about why I chose each one. A couple of weeks later I received a package (we live far away from each other now) and opened it up to find that list in the form of floppy disks. He had custom printed labels on each of them with my chosen games logos and on each disk there is a text file with my blurb of why I chose it. He did not want to frame them and then ship them as the glass could break in transit but planned on sending me a gift card as well to have them framed. While I appreciated his offer for the second portion of the gift, I told him I’d like to try and custom build a frame. Eventually that did not happen as building a frame is extremely finicky work and my woodworking skills are nowhere near there yet. But I did end up buying a frame and spent my time trying to neatly space the disks in an even fashion and put them a chronological order of release date.

This is definitely one of my favourite gifts I’ve received over the years and now hangs on my wall as a minimalist piece of art that recalls memories of endless hours spent gaming.It covers games from my early childhood to, well, even last night I played a game of CS:GO.It’s creative, simple, and has personal meaningful to me.

As a side note, you’ll notice these are all PC games as primarily I’m a PC gamer. There are plenty of console games that hold a place close to my heart such as the original Legend of Zelda, Gunstar Heroes, Mortal Kombat III, Goldeneye 64, Final Fantasy VII, etc. But to stick with the floppy disk theme I had to choose PC games.

If you’re curious as to why I chose those games, here are what the text files on them say:

1) Counter-Strike: Global Offensive
This is a game I can always come back to. A nice mix of tactical teamwork, utility and FPS skill keeps me always entertained. It’s a game I can pick up and play one hour and call it a day or play competitive matches hours on end.

2) Skyrim
While it’s not without its flaws, this is great game all around. Countless hours can be spent roaming Skyrim and discovering (and rediscovering) a well detailed landscape. Also a massive amount of quests can keep you busy if you’re a completionist. While compared to a couple of its predecessors it seems to be dumbed down a bit in terms of combat and simplicity of the quests, I can’t say I’ve played them and can fairly compare them.

3) Left 4 Dead 2
As a big zombie apocalypse fan this one is a must. Great coop gameplay and very a frantic and hectic pace (those hordes are super fun!) kept me entertained for way too long and this one is really the game that got me to like FPS games. One of the first games where I found an adaptive AI (the director) that kept the game quite fresh not matter how many times I replayed a campaign.

4) Diablo
As a kid this game was a big staple of my childhood. Diablo first introduced me to so many great new concepts such as non-turn based RPG combat and excessive violence (not sure if that’s a good thing). Surprisingly for a fairly linear RPG I found myself going back to this one quite often when I was young.

5) Rollercoaster Tycoon
One of the very first games I got when I was still a kid and barely introduced into PC gaming. Also my first introduction into tycoon style business management games. While a bit on the easy side, as a kid I still found the city/park/transportation games to be an instant favourite of mine. This game eventually lead me to many of games of the genre but I still haven’t found many that compare to it and find myself installing this one from time to time after nearly 20 years.

6) Starcraft
Again another from my early years of PC gaming and my first introduction to RTS games. Also one of my firsts when it came to multiplayer, both in terms of coop (against AI) and competitive, plenty of hours spent with friends from school playing this late into the night. This one also brought a little something else to the table for me as it was my first introduction to creating something for a game with the map editor and full scenario editor.

7) Civilization 5
Always trying to take over the entire world. Not just a domination victory, but I wanted every single tile on the largest map possible. While I did like Civ4 (which was my first introduction to the Civilization series) I absolutely loathed unit stacking something which was removed from Civ 5. Although conquering the world was the long term goal, I always found myself restarting games because I loved expanding my empire in the early stages the most.

8) Nox
This game was simply fun. While it followed the same style of game as Diablo (as in it was a non-turn based RPG) it was less violent and more humorous. A big difference as well, which made it truly enjoyable for me, was the fast pace of it.A fast paced RPG you can almost fly through the whole thing with a smile on your face because it was just simply a very fun game.

9) Borderlands 2
When it comes to preorders I’m heavily against them (see the new SimCity). Borderlands 2 was one of only two games I’ve ever preordered and fortunately I was not disappointed. As a big fan of the first one, I wanted basically an expansion to it with a new feel. The game engine felt a bit better, the weapons were crazier, and the skill tree of each class could keep the game fresh for plenty of playthroughs. And let’s not forget the great art style that made me feel like I was living in an action packed comicbook.

10) Fallout 4
I never finished Fallout 1, 2 or Brotherhood of Steel. And I while I loved the hell out of Fallout 3, I only played it on Xbox and never ended up going through New Vegas (I know, I know, that’s a crime). But I absolutely can’t leave this without at least one Fallout game. Based on the Skyrim engine it has a familiar feel to me in a very different setting. I absolutely love the Fallout world regardless of which specific game, a post apocalyptic world after the bombs dropped coupled with a 1950s (yet futuristic) feel is highly unique and captivating for me. Though the game had similar flaws to Skyrim, and even more complaints (see dialogue wheel) I still found myself playing this one from time to time though the first time through was pretty great.