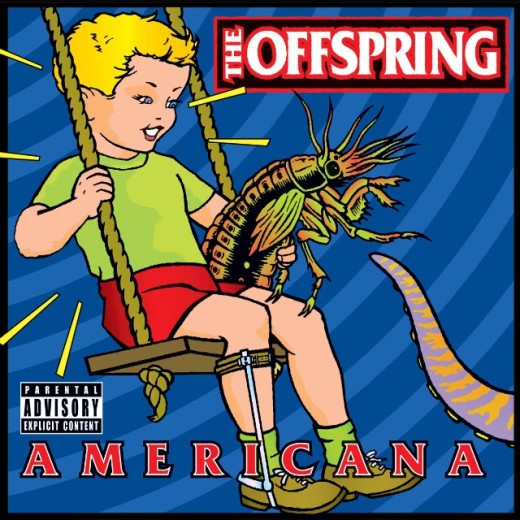 As cringe worthy as it may be nowadays, I still have fond memories of listening to “Pretty Fly (for a White Guy)”, and needless to say the music video made all twelve year old immature kids like me laugh. These days I can’t even listen to the song, that “uh huh, uh huh” part drives me up the wall. However, the song itself holds a special place in my heart as it did get me begging my parents to buy the album Americana which I listened to endlessly and why I’m making the record my next recommendation.

Many Offspring fans, mostly those who were fans from the band’s earlier albums, agree that the group has moved towards a more pop punk sound after this album. There are disagreements as to when this shift began though. Some say Americana was their last non pop album, some it was Ixnay on the Hombre, some say it was Smash. But most agree Conspiracy of One almost entirely sounded pop. My personal opinion is that America was the first step towards a pop sound, but it was not entirely all there.The singles released seemed to be the ones tailored towards mainstream radio play, such as “Pretty Fly (for a White Guy) and “Why Don’t you get a Job?”. And while they certainly caught my ear and exposed me to the group, these songs did not end up being my favourites on the album.

I can’t even rank my favourite tracks on this album. But I think “Have You Ever”, “Staring at the Sun”, “Walla Walla”, “The End of the Line”, “No Brakes, “Americana”, and “Pay the Man” all tie at number one. That’s more than half the album though. None of them resemble the pop sounding tracks on this album, and that’s a big reason why I love them. They’re definitely more pure punk than the other half of the album, which has always been one of my favourite genres. Over twenty-one years later and I still have these songs in my regular rotation of music so it goes without saying this album is a big staple of my music collection.

While some fans say the Offspring sold out after this album, I think this album was their first sell out. The album did exceptionally well for them, and proved that their pop like sounds hit higher on their charts than their punk tracks. In hitting that success with the singles released on Americana, they followed the formula with their next album and the next ultimately becoming less punk and more pop rock. I’m still going to recommend it, even though it started a shift in the Offspring away from my preference, I still love half of this album.Both for those hard hitting tracks, and for the late nights listening to the album from start to finish when I could still bear listening to “Pretty Fly (for a White Guy)”.