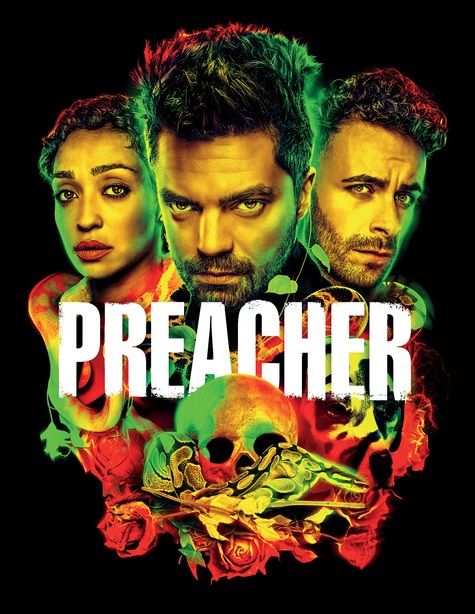 Normally when I tend to do a write up on a piece of media that I’d like to recommend to my readers, I like to stray from the often travelled path. There’s not much of a point to recommending Game of Thrones for a TV show, Gladiator for a movie, 1984 for a book, or London Calling for an album. These are already cultural icons praised by millions and those without an interest in them are still aware of their existence. This one is a TV recommendation, and while TV is one of the most popular forms of media consumed, the show itself is a little less known and is based off a comicbook. Though the comicbook is highly regarded amongst avid readers, the majority of TV viewers are not aware of it so I thought I’d recommend the TV adaptation of Garth Ennis’ Preacher. I finished off binging season three not too long ago and was more than happy with how the show has been adapted to the silver screen, especially with this season, which prompted me to write this.

As you read this recommendation, you’ll notice the show and comicbookare definitely not for everyone. It can be fairly disgusting and disturbing at times. Besides that it is highly unbelievable at times, a little ludicrous or absurd, and even has a dark comedic side. If that doesn’t bother you, or perhaps it’s your thing, then Preacher makes for a highly entertaining ride.

Anytime I’m discussing Preacher with someone unfamiliar with it, they tend to ask the traditional ‘what is it about’ question. This is a somewhat tricky answer given some of the absurdity in the Preacher universe so I usually bellow out a long winded summary that goes like this:

A long time ago, a demon and angel got it on and the angel gave birth to an abomination called Genesis, which is basically a floating ball of light. It’s imprisoned in Heaven but eventually breaks free and heads to Earth. There Genesis begins to inhabit the body of our protagonist Jesse Custer, a hard drinking, bar fighting, ex-con trying to redeem himself by becoming a preacher in a small town in Texas. Genesis essentially sits dormant in Jesse, the only difference in Jesse is that when he uses a specific voice he commands the word of God and no being can refuse his command. After trying to contact God to ask why he was given this power, he finds out God has basically checked out of Heaven and is having fun on Earth. And so the long quest to find God begins and is the general overarching plot to the story. Heavily entwined with the main plot is an organization called The Grail, which essentially controls most governments and corporations giving it unlimited resources. The Grail protects the bloodline of Christ, who’s only descendant is a mentally challenged man (thanks to generations of inbreeding) known as Humperdoo. This organization is headed by a morbidly obese glutton called the Allfather who is bent of capturing Jesse to transfer Genesis into Humperdoo and show the messiah to the world.

Since Preacher is a bit of a lengthy comicbook, there are several story arcs and a large cast of colorful characters. Besides Jesse, the main cast includes his badass girlfriend Tulip and his Irish junkie friend Cassidy, who also happens to be a vampire because why not. There’s Arseface, who tried to kill himself by putting a shotgun in his mouth, but missed and now his mouth looks like a sphincter. You’ll meet the Saint of Killers, a tortured soul of a cowboy who lost his family and took his revenge on a town. He was later gifted with revolvers that can kill any being in existence and is tasked with capturing Jesse. Herr Starr is a ruthless and no nonsense German commander in The Grail who has a ridiculous amount of nonsense happen to him.You’ll see Jesse’s grandmother, who has sort of voodoo like powers she uses to steal the souls of others for her possible immortality. There’s an owner of a slaughterhouse who has an extremely odd love for meat. A hillbilly who likes animals a little too much, a pair of idiotic angels who try to capture Jesse, and of course Satan. He happens to be surprisingly funny and charismatic despite being a stereotypical bodybuilding red demon with massive horns.Let’s not forget Hitler, who breaks out of Hell and begins working in a diner. I can’t cover all the characters in a short write up but that should give you enough to think about.

While the comicbook is great, I’m quite impressed with how the creative team adapted it to the small screen which is why I chose to go with the show for my recommendation. Besides adapting and following story arcs, the show has stayed true to form when compared to the comicbook in other ways. A couple of examples I can think of off the top of my head would be that the TV show is not afraid to use plenty of violence and some gore, although it doesn’t go too overboard. Also, as I mentioned earlier, there is a comedic sense to the show that comes directly from the source material. Given the absurdity of the show it’ll make you give out a guilty chuckle from time to time. In short, the atmosphere of the show feels as the comicbook reads.

Like almost all TV adaptations, the show runners have naturally made some changes. This can be a hit or miss, but in my opinion so far it’s been pretty win winwith Preacher. Some notable changes were shuffling up some of the arcs from the comic, suchas the slaughterhouse owner arc was in season one of the show while it’s fairly later in the comicbook. The visual depiction of some places created for just the show are fairly entertaining and creative as well such as purgatory. Again, all done with a bit of interesting absurdity.

So in summation, if you’re looking for a hell of an entertaining show I highly suggest Preacher, even if you’re not a fan of comicbooks this one is a unique gem. Again, it’s not for everyone, but if you enjoy larger than life stories and characters mixed with some comical absurdity and violence you’re in for a treat.

As a side note, after rereading this write up I can see it’s not written particularly well. These write ups are supposed to be both a recommendation to the reader also an exercise in writing for myself. However, there is a reason this one just sounds like rambling. I actually wrote a different recommendation for Preacher a couple of weeks ago, though the general idea of it was the same, the wording and grammar were polished a few times over. Unfortunately the file of my USB drive became corrupted and I couldn’t recover it and got frustrated. So I decided I didn’t want to write it up again, but after thinking about it again, I just decided to just write it quickly even if it’s poorly worded. Sorry.